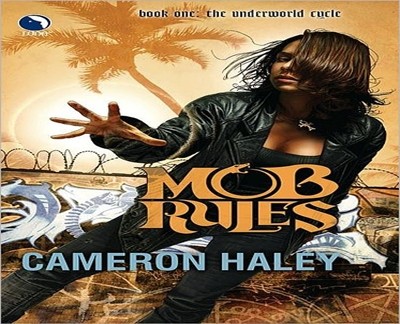 I’ve been hounding readers for submissions, and my friend Bill Good was kind enough to pass along the following thoughts on far-out Urban Fantasy novel Mob Rules, which was penned by talented newcomer Cameron Haley.

Dominica (call her Domino) Riley was born on the wrong side of the tracks, and the wrong side of the law. Some folks get out, some stay, some prosper. Domino’s prospered. She’s got a little something extra going for her. She can handle the juice. And she can handle it well enough that she’s second in command to Shanar Rashan, the Turk. Rashan’s really a 6,000 year old Sumerian, but in the L.A. Underworld he’s known as the Turk.

Things have been quiet, business has been going well, but now one of Domino’s crew is dead. Skinned and squeezed. By someone using juice. And as the Turk’s representative, it’s up to Domino to find out who, why, and make an accounting for it. She’s a gangster, not a detective, but her people expect her to get the answers and get payback, so she’s doing what she can. And she’s got the juice to do a lot…

I enjoy Urban Fantasy, and I enjoyed this variant of it. It’s a different  take from anything else I’ve read, and the idea that most magic users end up on the outside of the law makes quite a change from the more standard heroic setting.

Mob Rules is the first entry in the Underwold Cycle series.  The second installment is fresh of the presses, is titled Skeleton Crew, and you can snag a copy here.